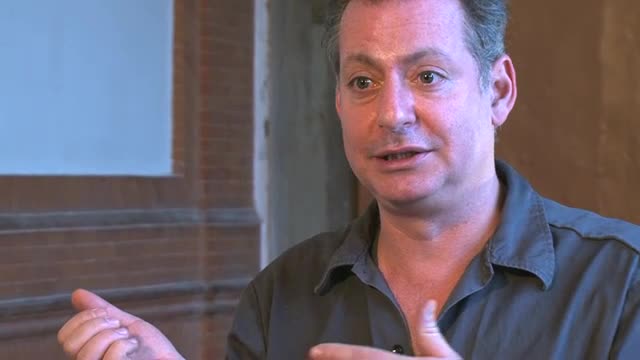 First I'll try to describe it. Solar Zebrafish is a very small portion of a very large grant, which is called ‘Towards Biosolar Cells’. But I consider these fish to be single solar cells. What we are doing is injecting isolated chloroplast into the embryos of zebrafish, and when they're born as larva we’re going to see if they can photosynthesise solar energy through the chloroplast, which comes from plants, and need less food or no food at all. There are a few other techniques we may use. We may have to add some genes from a sea slug that already keeps those organelles alive and actually lives off of sun energy, so it happens in nature already. But the real questions start to occur around whether or not this is a sustainable way of manufacturing new beings, how do we say, A, we have a vertebrate that's part plant. There's like ten horror films out here, Day of the Triffids, stuff like this that are already like that. Food of the Gods by H.G. Wells, he covered it already. But actually, as for plant-animal mixes, humans in particular are already part vegetable. According to George Bataille, when we stood upright the only thing keeping us from being vegetables is that we forgot to keep our heads up and stare at the sun until we went blind. And then we would be sunflowers. Van Gogh did it, but not everyone’s doing it. But maybe someday it would be nice for the human effect on ecology that people would be unable to produce. They would actually sit in a hammock all day, sunning themselves kind of green and vegging out, is what it’s called.
I have some problems with this project, though. I actually don’t think that as we make genetically engineered plant-animal hybrids that photosynthesise and are vertebrates, that it would be good if they escaped en masse. But at the same time, I’m a fan of animal consciousness and I believe in their entitiness, and I think, do they have less worth because we wiggled on them, because we reengineered them? As I say, they may have as much right to drift, even with the poor effect on even human ecology, it’s hard to say. But I did come out with seventeen questions for different people, because I'm not sure about this one. I'm not sure if it’s just, how do they say, whitewashing the issue, or greenwashing the issue.
For one thing, bioregional sustainability is not Luddite. It’s using ld technology that is called agriculture and it's based, like culture is based on agriculture. And I've worked as an organic farmer, and I know that, A, the food is better for you, B, it tastes better, and C, it is actually appreciating the cycles of life. Like you pee on the compost pile and you dig it back in. Farming is a gory act, though. It’s a strange thing to say. When you cut a lettuce, it bleeds down your arm. Actually plants like to eat blood and bone.

How to Build Tesla Easy

Intel+Toshiba Commercial: The Beauty Inside